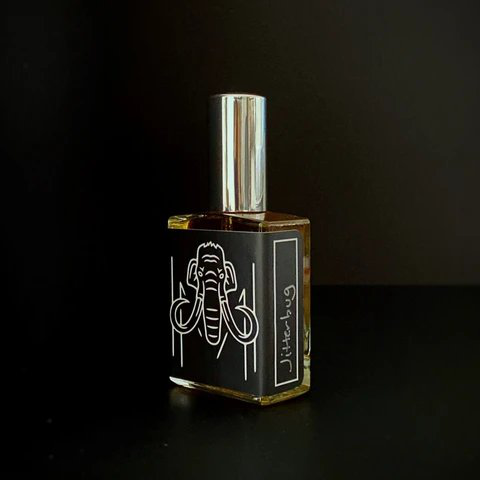 "The universe doesn't have laws, it has habits. And habits can be broken." -Tom Robbins, in Jitterbug Perfume.*

Jitterbug is my attempt to recreate the long lost fragrance that may be the secret essence of the universe, as described in the Tom Robbins novel Jitterbug Perfume. In the true spirit of the book, this fragrance is joyous, rich, natural, and doesn't take itself too seriously.

"Reality is subjective, and there's an unenlightened tendency in this culture to regard something as 'important' only if it's sober and severe. Your Cheerful Dumb are not so much happy as lobotomized. But your Gloomy Smart are just as ridiculous. When you're unhappy, you get to pay a lot of attention to yourself. And you get to take yourself oh so very seriously. Your truly happy people, which is to say, your people who truly LIKE themselves, they don't think about themselves very much. Your unhappy person resents it when you try to cheer him up, because that means he has to stop dwelling on himself and start paying attention to the universe. Unhappiness is the ultimate form of self-indulgence.